Dreaming of the "Heart Card"

As I wrote in the post below, (Mermaids in the Astral) you'd think I had indulged in a healthy amount of magic mushrooms last night. I don't know what my subconscious was doing, but clearly, it was having a good time.

So, aside from the dream where I was a mermaid with a lovely shimmering golden tail, I also dreamt about the tarot:

I am doing a reading for my niece, using my newest deck, the Dark Forest Tarot, which is another version of the Waite Rider Coleman tarot.  I tell my niece I like this deck a lot but it's a little darker than I expected. What attracted me to the deck was the sepia, toned down "darkness" but when I received the deck (complete with box and red velvet bag, groovy!) it was a bit darker than I expected. Still, I really like the deck.

I use the layout, or most of what I remember of the layout, of Dr. Art Rosengarten's Tarot of the Future: Raising Spiritual Consciousness."  What I remember is that the first card represents what the client thinks is going on,  what it feels like. The second card tells us what is really going on, on a deeper level. I don't remember the third card, so I create my own interpretation. The third card tells us what path to take to remain in a positive light. 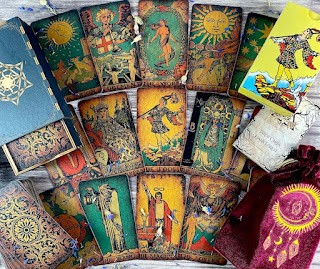 The important thing about the third card is that the reader needs to place the "Heart Card" first, and then the tarot card partially touching the Heart Card.

All this takes place in a hut like room, where I live. It's painted turquoise. It's on the side of a rural type road. People come inside all day for readings. One day I find, as I'm shuffeling the cards, yellow cards mixed in with the deck. The are oriented horizontally, the long way, which is odd. They are a bright yellow, not pretty. And strange sigil like markings on the cards. No words, title, numbers or symbols. A few of the cards had a faint impression of a Major Arcana card, but you had to look closely to see it.

I don't like these cards. They're ugly, and there's an uncomfortable feeling about the cards orientation. I have no idea how these cards got here, but I have a strong sense of a presence -- for lack of a better way to describe, angelic -- has something to do with this. And yet, it's not a malevolent vibe or anything negative. Just something odd and uncomfortable. 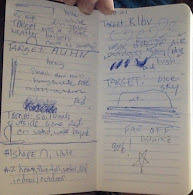