Cattle mutilations in my state of Oregon; this in the eastern par of Oregon.

A black-coated cow was found dead in July outside of Fossi with her legs tucked under her body with her head off the ground. Pictures show her eyes bulging out with flies around the body. The cow’s tongue and genitals were removed.

“It was a clean cut, so it wasn’t wildlife,” Wheeler County Sheriff’s Deputy Jeremiah Holmes said. “There were upwards of 80 cows milling around there … so signs of tire tracks, boot tracks were pretty much nonexistent.”

Nothing Much, Except for Vaeni, and General Musings on a Daily Basis

Nothing much, not on the UFO Land of the Strange.  Except that, I just started reading Jeremy Vaeni's new book:  I Am To Tell You This ... 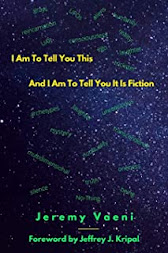