A new drawing, trying to recreate what I called "fuzzy puppet wolves" -- entities that visited me when I was a child. 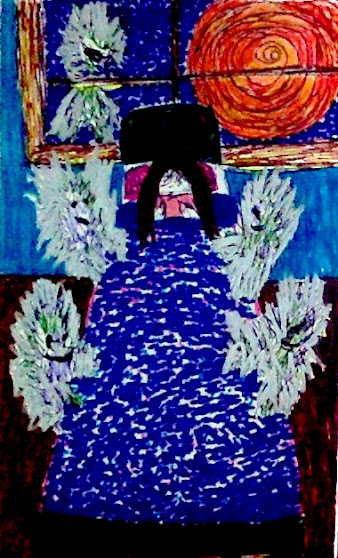 I wrote this piece about a childhood memory for my Trickster Realm’s column at Tim Binnall’s Binnall of America back in 2007.

I had to be in bed, flat on my back. Concentrate on the warm yellow light shining under the bedroom door. Then “they” came, several of them, oh, at least four, and somewhere I was levitated, floating through the doors.

I don’t remember what they looked like, or if I ever knew. I do “know” they were small, about my size. Skinny too, not human, like us.

Sometime around age thirteen or so these episodes became less frequent. As I wrote recently on my blog, it was rare when I could intentionally cause these episodes, and when they happened spontaneously, they became scary. I’d often shut down before I could leave my body.

Another event that happened frequently was the “puppet wolves,” visitations, as I called them. These events were connected somehow with the above, but also different. They weren’t the same creatures, for example. It wasn’t quite as pleasant either. And I remember some events happening during the day; still in bed, but daytime.

The fuzzy puppet wolves were very small, not more than about twenty-four inches tall. They were fuzzy/furry, gray, and reminded me of puppets. They weren’t exactly malevolent, but they were quick to be extremely mischievous, pushy, and just not as “nice” as the others. I could see these guys, and remember to this day what they looked like. The other guys, I don’t remember at all, except that they were small. The puppet wolves would gather around my bed, several of them, and they were insistent. They didn’t take no for an answer, and I’d have to go with them. I don’t remember anything other than that.

Not long ago, my husband “Joe” and I were talking about our childhood “weird” experiences; memories of the paranormal, or whatever word you want to use. Before I said anything, he began to tell me of something that happened to him sometimes when he was a kid. While he was in bed, furry gray “things” would gather around the edges of the bed, and tug at him, taking him away. (Neither of us remember where we went.)

I asked him if they reminded him in a way, of wolves; he said yes. Small nasty little wolf puppet, or stuffed animal-toy beings. He had never heard my story before.

Another Synchronicty between us. When faced with all these parallel experiences, going back deep into childhood, I find that I can’t ignore things like karma, or metaphysical connections, or reincarnation, or. . . something. I’m not sure what it means, but to say it doesn’t mean anything is supremely incorrect.

The Wolf as Totem

I refer to these nasty little beings as “wolves” yet they didn’t hold the wolf spirit. In fact, the wolf is my totem, and the Wolf Clan is one of the clans of the Lenepe, my grandfather’s tribe. (So I’m told.) I’ve had amazing dreams of wolves; often in connection with white wolves and teachers. I call upon Wolf often and he is my friend and guide.

But at the time, a child unfamiliar with the gift of Wolf and all its meanings, I tended to think of these persistent unpleasant creatures as wolves.

It’s interesting that I thought of these beings as puppets; that is, puppets without any people operating them. They were just empty moving “skins.” They were footless, too, no legs. A screen memory, a false impression to cover whatever was “really” there? Puppet implies that something else is behind it; that the puppet isn’t doing the thing, the person operating the puppet is in control. Whatever was behind the wolf puppets was not revealed. Or, remembered.

In looking back over a lot of what I’ve written about aliens and odd experiences, I realize I use the term “invisible alien” a lot. I don’t recall what they looked like, these beings that came to float me out doors at night. I don’t remember parts of UFO sightings I’ve had; missing time. Whether these are connected or not I don’t know.

There are many layers to these kind of experiences, and I suspect symbols replace symbols that replace yet other symbols, all to make us more comfortable, to protect us, — or us to protect ourselves — as we try to exist in the mundane world. Our journeys into the astral/other worlds remain submerged in our subconscious. It’s been so for a very long time, as has our need to go down and retrieve these memories. Retrieve the correct memories. With each “dive” into our subconscious, we move closer to some kind of understanding.

(for example, I wrote that I had to concentrate on the yellow light underneath the bedroom door. I told my mother about these experiences, and she insisted that there was never a light on in the hall after we went to bed. I asked her, then, what light was it that I was seeing? she had no idea.)

I wonder if I’ll ever know.