On Facebook, Nick Redfern posted a funny comment about beards and "poet fucks." No fan of poetry, he. I kidded him about that. His new book Diary of Secrets: UFO Conspiracies and the Mysterious Death of Marilyn Monroe reminded me of a poem I wrote years ago about a strange conversation with some weird Hollywood guy about Marilyn. Here it is: 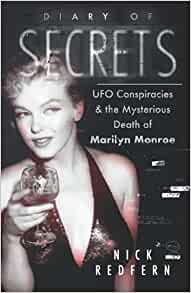 Marilyn Monroe’s Stomach
Dripping from his fork
the rare steak
as he thrusts it at me
We’re sitting inside
Musso and Frank
“They lost Marilyn’s stomach you know,’
he said, chewing with his mouth open.
“Doesn’t that tell. you something?”
I shrug. He should know. Probably.
He’s worked the lots. He wears a fedora.
He motions the server without looking.
Orders another drink.
Me, I stay sober. I have to get out of here.
“They don’t tell you the whole story,”
and he slurps the last of his drink.
“Lots goes on ... no believes anyone.”
Swirling the last piece of meat, he nods
“I’m telling ya kiddo, it’s the goddamn truth.”
What am I supposed to do with this information?
I’m just a naive hippie girl living in Hollywood.
Right down from Paramount Studios.
“Sure you don’t want a drink?” he leans in.
I shake my head.
Settling back into his belch
he breathes out the mantra once more:
“Damn liars, The cops, the studios, everybody.
Never the damn truth.”
#ufos #poetry #free verse #hollywood #paranormal