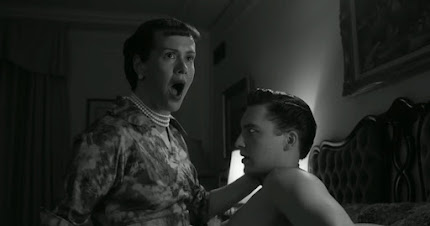 Yes, that's Mamie (Sarah Paulson) and Valiant Thor (Cody Fern) getting it on.

I’ve been a fan of American Horror Story since its beginning. There were a couple of seasons I didn’t care for. But overall, oh it is a great show! I love the revolving cast, the stories, the direction, the credits, the acting, everything.

And they surpassed themselves with the second half of this year’s program: Double Feature.

I loved the first half, which had a family retreating to the east coast so the husband could work on his writing, and then . . . vampires and such. Excellent. But the best, the best, was the second half. UFOs! From Eisenhower to Nixon. Not just "the grays" but more than one alien race. Glowing eyes and exploding heads. Pink caftans. And Valiant Thor! Yes!

From the black and white to color, depending on the era, to Valiant Thor in the Whitehouse, to Mamie Einsenhower's  glorious pink caftan, brilliant. (Pink was Mamie’s favorite color.)

I’m not going to get into discussing the “truth” of things because, after all, when it comes to aliens and ETs and UFOs, no one knows “the truth.” This is also a television program for entertainment. It’s not a documentary. But the writers who did the research for this season obviously had a good awareness of the UFO realm, and went with it. Sure it’s speculation and what ifs but it’s really good speculation and what ifs. It’s a throw back to classic sci-fi stuff.

I occasionally post my artwork  with UFO and related themes here on the Orb. I've started a blog that shows all kinds of art work, not ...