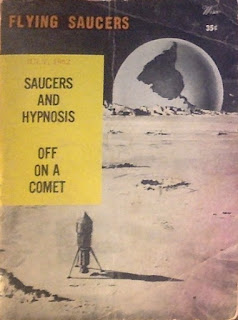 Found this old issue of Flying Saucers (1962) in my files, with an article by Frank Patton who writes that Joe Simonton, receiver of alien pancakes, was the victim of a scam conducted by human real estate developers.

Wisconsion farmer Joe Simonton’s 1961 encounter with pancake gifting UFO occupants is a classic case. Typical seemingly non-sensical act by the aliens. It turns out that the pancakes -- Simonton referred to them as “saucer cakes” --  were of ordinary earthly ingredients. The non-human entities looked humanoid, and wore clothing.

One theory as to what really happened: hypnosis. According to Patton,  Simonton was the victim of repeated hypnosis sessions by real estate developers who were planning to open an amusement park in the area. One of the attractions included a flying saucer. Simonton was hypnotized numberous times into believing aliens  presented him with pancakes.

Patton overhead “several men” in a diner laughing and discussing their sessions with Simonton.

Patton believed many other UFO witnesses were also hypnotized by both humans and non-human entities, into believing their UFO experiences were literal events. 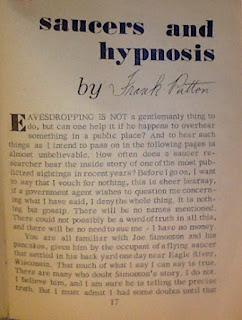 thanks, I fixed it. Good eyes!

The CIA and Wooly Mammoths

They do keep trying. What is it with the desire of Mad Science to bring back the wooly mammoth? This item from BoingBoing: The CIA's ven...