One could say just being in the hospital is weird enough. Especially after spending two weeks in, then a week and a half out, then back in again for another stay of a week. Thankfully, spouse is better than ever all the hell he's been through and things are looking good.

While there -- I spent the nights there with him, as most of each day -- two odd things happened.

The first: deja vu. I had at least three distinct cases of deja vu. I haven't experienced deja vu in a couple of years, at least. It was something I experienced all the time as a child, up into my teens, and then occasionally as an adult.  It was both unnerving and kind of neat in a strange way.

The second event involved tarot cards. While staying in the hospital with my husband, I would dash home to take care of the house, then rush back to the hospital. As I was leaving the house one day, I had the urge to bring a deck of tarot cards with me. I usually carry a mini-sized deck with me but wasn't during that time, and anyway, I felt the urge to bring a larger deck with me. 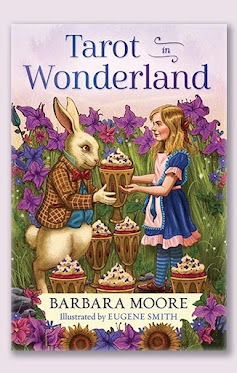 So I picked up my Tarot Wonderland deck and left.

Later that day, a CNA came in and mentioned the tarot. I said "Speaking of tarot," and pulled out my deck. She said to me "I knew you were all about that, I could tell by looking at you, that's why I mentioned it." She asked if I could give her a reading, which I did. And we had a nice conversation about sage and candles.

I don't know what it is about me that has some people just know I'm "all about tarot" but there you go.