Dreams concerning aliens, ETS, the other realm, UFOs . . . some research is on-going concerning a connection between waking experiences involving these things, and the dream world. (Google and all kinds of links to interesting research and studies will pop up.) 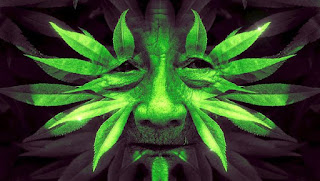 After school, on the playground, with another staff member or two, and a group of children, waiting for the bus and parent pick-up. Getting on dusk. Earlier in the day, I had gone to a few bookstores and came across various magazines and books about The Green Man. Met a person with an interest in Green Man and we had quite a conversation. I was thinking about all the Green Man synchronicities as I was waiting with the students.

It's getting a bit chilly. Things feel . . . odd. Suddenly, large brilliant white lights appear in the sky above us, come down, we're all frightened and these lights are behaving as one, intelligently controlled. The lights form a circle of lights above us and scoop us up. Not only the people, but part of the playground - the black top -- as well. Just scooped out a large circle of ground with us on it and brought us into the ship.

Now we're standing on this large circle of blacktop inside a spaceship.

We're very scared, and the ship is zooming around, just a few feet above houses. We can see outside, but the craft is cloaked. No one sees us. It's like "they" -- the aliens -- are toying with us. We are so lost! We're pretty sure we're still on earth, but, where? We don't recognize the neighborhoods. I'm afraid we're going to be dropped off in the middle of a strange area and how will we get back, how will I get the children safe?

The aliens are Reptilians. We can't see them, but we just know this. We are very aware of their presence. They're above us in the ship, watching us. Like we're a toy. A game.

Now we're zooming off into outer space, and this time I am really terrified. But also angry. I start to pray to Jesus, which, even as I'm doing so, is ticking me off, since I am not a Christian and don't believe at all in a divine Jesus. But I'll try anything in order to save us. So I pray like crazy and promise Jesus that I'll believe if only he'll get us out of here.

Then one of the Reptilians calls down to me: "Do you really mean that?"

They return us to the playground. By this time parents are there, panicked, naturally. I wonder how in the world are we going to explain this but it doesn't take much, since everyone has seen the ground open up, the ship return us, etc. And one of the men on the ship goes on the news to explain how the Reptilians were showing him how part of him is Reptilian, exposing his lizard face under his real face.

The believe in Jesus part has me interested, if not also annoyed. When I was writing my Orange Orb column for UFO Magazine I wrote a column about Jesus saving me from the aliens. When I lived in my father's house in Northern California, I was having extremely intense dreams of aliens. (I also had a dream where I woke up coughing due to the strong odor of incense, heard chanting and a misty blurry priest during mass; turns out the house belonged to a Catholic priest who died in that room.) Finally, in one of the dreams, I prayed to Jesus to keep the aliens away. It worked. Which confused me. I'm not a Christian. I don't believe in that. However, I did spend eight years in Catholic school. I didn't believe any of it back then either.

The CIA and Wooly Mammoths

They do keep trying. What is it with the desire of Mad Science to bring back the wooly mammoth? This item from BoingBoing: The CIA's ven...