Media and The Death Card (And a Killing Eve Spoiler Alert)

I loved, with a passion Killing Eve. Did not read the novels, but from the beginning, was hooked on the BBC television series. LOVED it. 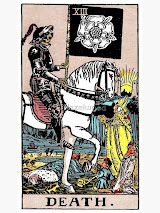 The DEATH card does not mean literal death. But as usual, for dramatic purposes, it always means death with a capitol D in movies and television. (We can say it represents rebirth, the shedding of old ways and into the new, but not dying a horrible death run over by a bus while in stage 4 after being bit by a venomous snake with no known antidote.)