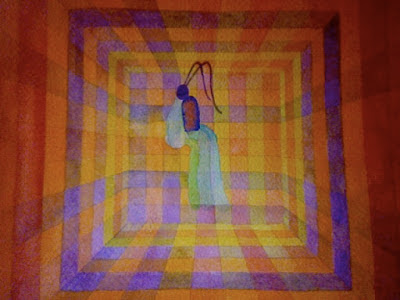 
This painting is a watercolor Jim did many years ago, when we were first together. I remember when he painted it. It's a small watercolor on paper; about 18" by 18". He was going through his old portfolios last night and found it.

I told him it was an "interesting painting" and that it reminded me of an alien; some kind of alien painting. He said he had no idea what was going on when he painted that; what he was thinking or why he painted it. No recollection of the inspiration or what he was trying to do.

He asked me what I meant by "alien painting" I said, well, it immediately, for some reason, just screamed alien and spaceship at me. I have the impression the ant is female, very large, "alien," and is holding something, some sort of tablet. Jim looked at it and said he saw what I meant. I reminded Jim of all the giant insect alien stories; usually praying mantis type creatures, or giant grasshopper type beings some speak about in connection with UFO encounters. After he looked at it he said it reminded him of a female being as well; probably because of the way it's sitting and the long robe or whatever it is it/she is wearing.

It was at that time that Jim and I were experiencing a lot of unusual UFO events, including an episode of missing time. I had my "Geisha Woman Alien" dream during that time frame.

Speaking of alien insectoid beings, in a bit of synchronicity I was listening to George Noory last night on C2C. (By the way, say what you will about him, and I have, he is a goof ball in many ways, but he was defending the medical marijuana use law in California, so good for him) and he and a caller were sharing praying mantis stories. Not in the context of aliens or UFOs however, more mundane than that. And earlier today I read Richard Thomas Room 101 column on Binnall of America, where he writes about Ghosts, Aliens, Yeti and the Late Great Nigel Kneale British "father" of sci fi television and movies. Which inspired me to post something on my blog Frame 352: The Stranger Side of Sasquatch with this image: 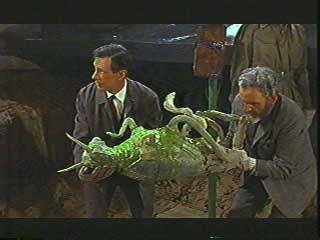 I'm deathly, pathologically afraid of insects. I had some chilling experiences as a child -- I won't go there, far too personal and wrapped up in family dysfunction abuse horrors -- but at the same time, I don't like to see people just stomp on insects for no reason. (There was also a weird event in Crescent City, California, involving a Japanese beetle, alcoholic abusers though not to me, hmm, a theme here I see, and I kid you not, a real life scene with "Deliverance" type redneck hillbillies, complete with shotguns and a truck full of pitbulls. But I digress.) (And there was another thing with a bumble bee when I was a kid, and my sister as well, I found out years later, that has to do with missing time and high strangeness.)I'll certainly go out of my way to kill bugs in the house, depending on what kind; wasps, etc. Others I take outside. Well, okay, I try to get Jim to take them outside, but the point is, I don't like killing things if I can help it.

Well, that all took a weird turn, I see. As disjointed as all this might seem, one thing stands out: a conflicting relationship with insects. I like some of them, they're pretty, many are harmless, etc. Others I am fearful of to the point of vomiting. People with encounters with giant insectiod alien beings report both terrifying experiences, as well as ones of learning, wisdom and beauty. Why this contrast? Are our mundane encounters a relfection, on a symbolic level, of these experiences?
Posted by Regan Lee at 4:45 PM

Your husband's painting and your essay resonates with me. The painting is at once beautiful and disturbing. I can look at it because it's a painting, not a photo of a bug. And the head isn't too big.

When I've seen artistic renderings
of aliens (such as grays and insectoids) in some abduction books or online on websites, it's very difficult to look at.

I'm bug phobic. I even smell most bugs in the spring and summer, here in Massachusetts. I'm very aware of them and think I've been since I was quite young.

I also had, at least one close encounter with an object (and maybe more encounters with other objects and beings - memories seem blurred, dreamlike, disjointed and partially missing).

The "alien" type bugs - like praying mantis', grasshoppers, ants(the larger ones) are very upsetting to me. Also wasps (or maybe they are hornets) with the skinny dangling legs when they float and hover.

I've become so upset around these types of bugs that I've shreiked and run several times. I embarass myself. I still have this phobic problem and I'm 54years old.