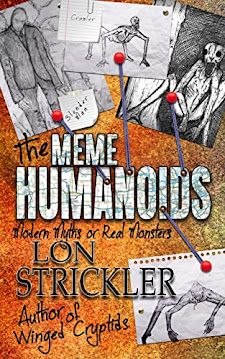 Lon Strickler’s recent book The Meme Humanoids: Modern Myths or Real Monsters is a good contribution to the cryptid data pile. The topic is somewhat fresh: Rakes, Slender Man, Tall Whites  and similar beings. . . while those stories have been around for awhile I don’t think anyone has devoted efforts to create a collection of narratives about these encounters. In Strickler’s book you have a great collection of very weird experiences involving, among other things, “creepy pasta” cryptids.  That was a new term for me. Creepy pasta, pasta cryptids, etc. are those creatures that started out as fictional but somehow, sometimes,  became real. (Example: Slender Man was the creation of Eric Knudsen and not a real being.)

Some find the fact that Strickler doesn’t offer us solutions to these encounters frustrating. I find it refreshing. There’s of course, which is all any of us have, but the fact there are so many similar experiences of a highly weird kind reported by people all over the world is enough for me. I still don’t know what these creatures are, or why they are, but it’s not Strickler’s job to decide that for us, and he doesn’t. He simply presents us with a good collection of personal stories.

A question that Strickler poses: are humans capable of projecting, or creating,  thought forms, turning them into actual beings? (Think Tulpas, for example.) Is that what is happening here, at least in some cases? The title of the book forces us to think about this; are these creatures, once myth, now real? If you consider myth to mean real, but in another sense, you're on to something, I think.

The last story in the book is an odd one. It is written almost like a horror fiction novel, which Strickler acknowledges. Something about this last encounter in the book seemed off; too much creative writing, not to mention one hell of an unbelievable story. And that’s saying something; some readers might think “All of it is unbelievable!”

But Lon Strickler includes this story and he gives his reasons why. The inclusion of the story is a good way to end the book.

If you are interested in cryptids or the paranormal UFO world in general, you will want to read this book.