When I read this headline on Boing Boing I thought "Cool. First we had the "not deer" cryptid and now, vampire deer!" Quickly realized there's no such thing of course. Actually, it's not called "vampire" deer so much as it is the Chinese Water Deer. Instead of antlers, both male and female grow fangs. Nothing supernatural but very interesting. I'm always interested in odd quirky facts about animals.

Read about the small, fanged deer on Boing Boing. 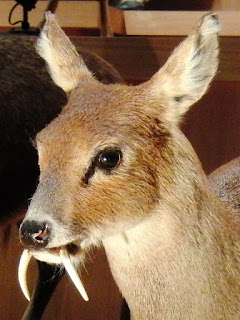